The deep gluteal space is an area under the buttock muscles just behind the hip joint which has recently been identified as a seat for certain pathologies. Advances in endoscopy have allowed us to explore this area in detail and identify abnormalities causing pain as well as other symptoms that were previously unexplained.

The deep gluteal space is a complex area containing fat, nerves, blood vessels, muscles, tendons and ligaments. The sciatic nerve that passes through this space is closely related to several structures and may become entrapped along its path producing symptoms. It may be entrapped by scar tissue, the piriformis tendon, the hamstring tendon, vascular abnormalities, tumors, fractures or bony abnormalities. Entrapment can also occur due to decreased space between the femur (thigh bone) and the ischium (a pelvic bone) through which the nerve passes.

Pain is usually one sided and aggravates when you flex or rotate your hip. Sensation in the lower extremity may be decreased or altered. You may limp or alter your posture to avoid pain.

Deep gluteal space problems can be addressed by arthroscopy, a minimally invasive procedure which allows your doctor to have a clear magnified view of the space. You will lie on your back or side. Small incisions are made and portals placed in the front and side of the hip to access the deep gluteal space. An arthroscope is passed through one of the portals to enter the deep gluteal space. The sciatic nerve is identified just behind the tendon of the gluteus maximus (buttock) muscle. It is assessed for mobility and impingement. Other structures such as the piriformis and hamstring tendons are also evaluated. Scar tissue or tissue overgrowth are released with special instruments and the nerve is decompressed.

Surgery may occasionally be associated with certain complications most important of which is sciatic nerve damage which can affect lower extremity function. 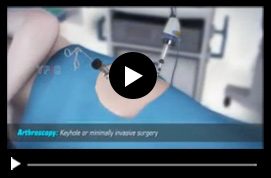